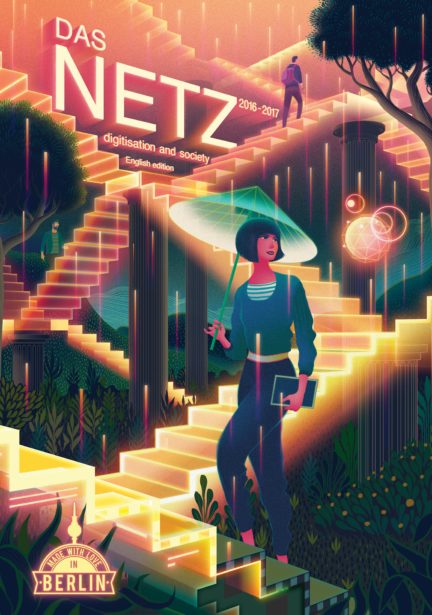 Digitalization is changing our world – and we are in the middle of it. The digital magazine „Das Netz“ (German for „the net“) gathers writers, activists, scientists, politicians and entrepreneurs to think about the developments of our digital life. More than 50 contributions reflect on the digital transformation of society.

Topics include the internet of things, artificial intelligence, ethics of algorithms and responsibility as well as social media and election campaigns plus digitalization in China and the USA.

8 The internet works in mysterious ways
12 Predictive Healthcare: Medicine in the data revolution by Lydia Heller
16 Attack of the Fridges by Jessica Binsch
18 Artificial Intelligence: The dreaming algorithm by Christoph Drosser
24 What happened online? January 2016
26 The Digital Doping Hunt by Martin Einsiedler
30 #scanallfishes
34 Universities face digital challenges by Ada Pellert
37 Digitalisation is happening… in your aerobics class An interview with Stefan Will
40 What happened online? February 2016
43 Learning to program is a skill for life by Gerhard Seiler and Jutta Schneider
46 Emancipation through Citizen Science by Henry Steinhau
50 If you were Queen of the Internet, what would be your first decree?
53 Catastrophe! Communication in states of emergency by Julia Schönborn
56 What happened online? March 2016
58 The Twitter troll’s digital alter ego by René Walter
62 The Summer of Pikachu by Dennis Kogel
65 Barfing unicorns and puppy faces: What is the secret ingredient in Snapchat’s success? by Duygu Gezen
68 Really great sex – just do it right by Christine Olderdissen
71 Happy coincidences and personalised filter bubbles by Christoph Lutz
74 What happened online? April 2016
76 Who runs the internet?
80 The 2016 US election campaign: Digital mud-wrestling by Lukas Schöne
84 The evolution of the digital election by Adrian Rosenthal and Axel Wallrabenstein
88 Why social bots threaten our democracy by Martin Fuchs
92 This message will self-destruct in three seconds… by Aleksandra Sowa
96 What happened online? May 2016
98 Politics has to be shaped by people Interview with Nadine Schön
101 The SPD is becoming more and more digital Interview with Katarina Barley
105 Open? Free? Inclusive? Internet Governance at the crossroads by Henning Lahmann
108 How are the rules of the internet made? Interview with Wolfgang Kleinwächter
112 The Digital Rich-Poor Divide
114 Turkey censors both online and on the streets by Hauke Gierow
118 What happened online? June 2016
121 Will digitisation destroy our values? by Sabine Leutheusser-Schnarrenberger
123 What have algorithms got to do with human rights? Interview with Ben Wagner
126 An internet of self-determination, diversity and participation Interview with Heiko Maas
131 Missed opportunities, half-hearted solutions by Halina Wawzyniak
132 Digital policy decisions: Fail! by Konstantin von Notz
134 Digitisation is like the industrial revolution Interview with Christian Lindner
136 We need more European standards Interview with Jan Philipp Albrecht
139 Cautious steps into the minefield by Joerg Heidrich
142 Personalised pricing needs rules by Klaus Müller
146 What happened online? July 2016
149 Digital by Default by Julia Kloiber
154 Towards a giant world computer by Stefan Mey
158 “We’re about to experience a real killer App for blockchain” Interview with Shermin Voshmgir
160 Bitcoin: the ascent of a borderless currency by Imogen Goodman
165 The political promises of Bitcoin Interview with Andreas M. Antonopoulos
168 What happened online? August 2016
170 Chinese internet firms find success with indecent exposure by Finn Mayer Kuckuk
173 Wallet-less payment is an everyday affair in China
175 The next Silicon Valley? It could be here. by Tobias Schwarz
181 On robots and class struggle: are we being replaced by machines? by Mads Pankow
184 What happened online? September 2016
187 We can guarantee the availability of the internet Interview with Harald Summa
191 Politics should make things work, when
196 TV at the crossroads of internet and humanity by Andreas Busche
200 Hatsune Miku, the world’s first cybernetic star by Finn Mayer Kuckuk
202 What Pokémon Go has in common with Locative Art by Valie Djordjevic
206 What happened online? October 2016
208 “The moment when an unexpected perturbation changes the system from within” Interview with Tatiana Bazzichelli
211 The inhibitions of Richard W. by Christian Rickerts
214 Digital Passport
216 The myth of struggling through Interview with Lisa Basten
220 What happened online? November 2016
222 Caring for customs and heritage of the Internet by Dirk von Gehlen
226 So two computers meet, and one says… by Alard von Kittlitz and Johannes Gernert
230 Gamification: the brain’s addiction by Ippolita